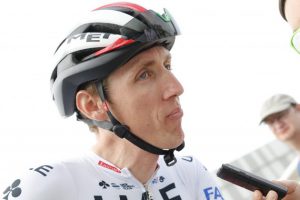 Dan Martin and Romain Bardet were targeted by thieves after crashing yesterday in the Volta a Catalunya. Crashing at 70km/h on a descent around Barcelona, keeping an eye on their kit was the least of their worries – but to add insult to injury it turns out that someone grabbed Martin’s Garmin off his bike.

In good spirits, Martin said on Twitter, “To the guy who stole my Garmin off my bike when I was picking myself up off the floor yesterday; please send the training file to [my coach]. My training peaks needs to be updated.”

Bardet, who came off worse in the crash and is still waiting to find out the extent of his injuries, also fell victim to thieves. They nabbed his power meter from his broken bike.

Pretty shocking behaviour, though perhaps not all that surprising as earlier in the race another spectator filmed himself laughing at an injured rider.

We use cookies to ensure that we give you the best experience on our website. If you continue to use this site we will assume that you are happy with this.Ok